Unfortunately, due to the COVID-19 Pandemic, we are unable to host any presentations in 2020.  However, here is a teaser from our planned exhibit. 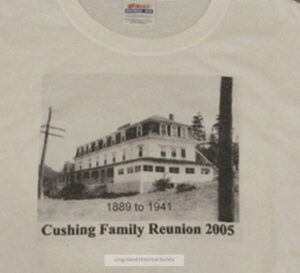 Our exhibit this summer was to have focused on the story that T-shirts tell of various island events. And what wonderful stories they told! Perhaps we will have the opportunity to mount the exhibit in the coming years. This photo is of a T-shirt that was distributed at the annual Cushing Family Reunion in 2005.  The reunion has been held at the VFW Hall off and on since the 1950’s and continuously since 1980.  The photograph on the shirt is of the Casco Bay House, a 30-room inn owned and operated by Charles E and Georgiana Cushing from 1889 to 1941 when the Navy took it over. It was located at the bottom of the hill across the street from the VFW Hall and was taken down in the early 1950s. The family reunion was started by the nine children of their eldest son Benjamin and his wife Florence (nee Woodman) and is now attended by descendants of all five of Charles and Georgiana’s children. From their five children there are 16 grandchildren, 45 great-grandchildren, and innumerable great-great and great-great-great grandchildren! 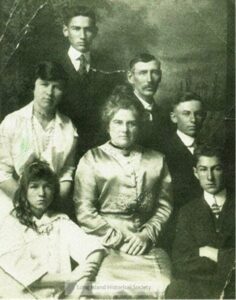 In this photo of the Cushing family from the early 1900s, Georgiana nee Ridlon Cushing is in the center of the photo, surrounded by (starting in the lower left) Dorothy Cushing Carrington, Gladys Cushing Johnson, Benjamin, Charles Edward, Charles Sumner, and Walter. 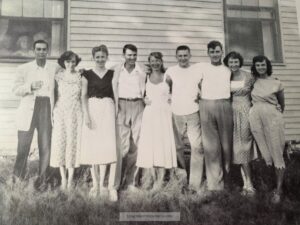 Standing in front of Ivy Hall where the family stayed for many summers, the nine children of Ben and Florence are: Ben Jr, Beryl Cushing Lowell, Pauline Cushing Clough, Edward, Gwendolyn Cushing Dobbs, twins Donald and Ronald, Constance Cushing Brayley, and Lorraine Cushing Doughty.  This photo was taken in the 1950s.