Our 2019 summer exhibit, entitled “Sense of Place: Two Brothers Six Generations”, has now closed.  However, you can still view items from the exhibit in a binder at the Historical Society museum.  In fact, we have binders of most of our past exhibits available for viewing, so you can delve into a particular area of interest at your leisure.  Here are some tidbits from the past exhibit.

The exhibit focused on the Murphy brothers Edward William (E.W.) and John Patrick.  They owned a drug store on Congress Street (near Lincoln Park) in Portland at the turn of the 20th Century, and manufactured a cough syrup known as “Murphy’s Cough and Croup Balsam “.   In 1904 they came to Long Island, with E.W. building several houses (the Box Cottage, the Balsamique, and the Green Camp) on the ocean side of the island  and John Patrick purchasing several cottages on Island Avenue in the area now known as Gypsy Village.  E.W. was known for his elaborate etchings, done on cigar boxes.  In fact, the Box Cottage and the Balsamique both had cigar boxes used for the walls and ceilings.   The Balsamique was built with a unique bowling alley and shuffleboard court in the main living area.  You can see the removable flooring strips over the gutters in the photo below, as well as the cigar box panels on the ceiling. 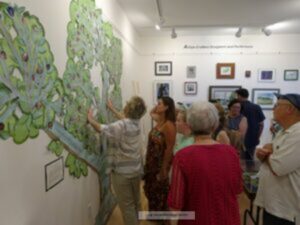